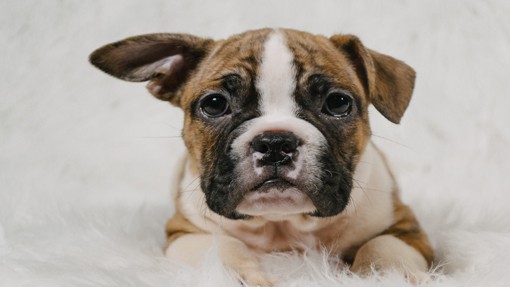 Generally taller and leaner than his English Bulldog cousin, the American Bulldog originated in the United States in the 18th century, when farmers used him to drive and catch cattle and hogs. He tends to be full of energy and loves his people, but prey-animals should beware.

The American Bulldog struts in and immediately makes himself a member of the family — the one whose job it is to protect everyone else. With young children, he can be affectionate and gentle, and he often gets along well with cats and other dogs when raised with them. That said, early socialization with other pets and children is important and young children should never be left unsupervised with any dog, especially one of this size and strength.

He can live in a city or suburban environment, but only if you can provide him with enough exercise daily. If he’s not getting enough exercise, he may get bored and chew something to pieces — like your sofa. Once your veterinarian determines that he doesn’t have any underlying health conditions to hold him back, consider taking him running or providing a combination of physical and mental exercise that will keep him occupied.

Healthy American Bulldogs can excel at dog sports such as agility and nose work. They can also be good companions for walkers, joggers, hikers, bicyclists and skateboarders, as long as a veterinarian doesn’t find any underlying health issues that could limit the dog’s activity.

The best owners of these dogs are already familiar with and knowledgeable about bully breeds and have plenty of time to socialize, train and exercise the dog. Like any dog, American Bulldogs can be destructive if they are left with nothing to do. They may take up digging or chewing to occupy their time.

American Bulldogs are generally excellent watchdogs. They usually don’t bark unless there’s something to bark about.  They are best suited to a person or family who wants to spend a lot of time with their dog and is willing to put in the effort to make him a true companion.

The American Bulldog typically shadows his owners, always wanting to be right by their side. They aren’t above being a lapdog, either, size notwithstanding.

The breed can be highly intelligent and trainable. Besides being family companions, some have jobs with the Border Patrol, as personal protection dogs, and as ranch hands and hunting dogs.

It’s important to train the American Bulldog with an eye toward his sensitive nature. He tends to respond best to loving but firm guidance and they generally hate to be in trouble with their people and will pout when scolded. If you train with patience and keep things positive, an American Bulldog will most likely do whatever you ask if it’s within his power.

As family dogs, American Bulldogs tend to be protective toward children and women. They can do well in homes with children of any age, but they are not babysitters. No dog should ever be left unsupervised with a young child, especially one that may not be aware of his own weight and strength.

You should also supervise the dog when your children’s friends are in the home to make sure he doesn’t try to intervene if he thinks “his” kids are being harmed during normal play.

When they grow up with cats and other dogs, American Bulldogs generally get along well with them, but they can be aggressive toward unknown cats and dogs. If they are in a home with other dogs, they tend to do best with one of the opposite sex, although females can usually live together more peaceably than males — unless both males are neutered.

American Bulldogs are often aggressive toward animals that they consider prey or a danger to themselves or their family members, so they should not be permitted to roam free. However, this trait makes them excellent at hunting or catch dogs.

Socialize your American Bulldog puppy from day one. He should meet many new people and other animals and experience a number of different situations and places. This early exposure will help him learn to be confident in unusual surroundings and help inhibit his instinct to be fearful or even to bite when he encounters unfamiliar situations or people.

Start training an American Bulldog the day you bring him home, or before you know it, he will have you trained. He is capable of soaking up everything you can teach him. Don’t wait until he is 6 months old to begin training or you will have a more headstrong dog to deal with.

The American Bulldog has a short coat that may feel either soft or stiff. This breed sheds moderately year-round, so brush or comb the coat weekly to remove dead hair and distribute skin oils.   The rest is basic care. Trim the nails every three to four weeks or as needed. Brush the teeth often — with a vet-approved pet toothpaste — for good overall health and fresh breath.

If you’re looking to buy a puppy, Allie’s Pet Corner in Rochester, NY has new puppies for sale every week.  Check out our available puppies, and signup to be alerted by email when our new puppies come in: https://alliespetcorner.com/available-puppies-to-adopt/